It is hard to imagine the sheer terror inflicited upon these people by Pol Pot and his Khmer Rouge regime.  They starved and murdered more than two million of their own people, nearly one-third of their population.  They burned all schools and destroyed all textbooks as they killed all the teachers and promising young students.  The only future for the children of Cambodia is the hope that education will provide these deserving children with the tools they will need to provide for a better life for their families.

“This is not an affluent community,” Conn said, “but they are compassionate, and the way they have come together is spectacular.” 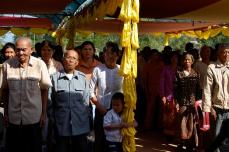 Just one day earlier, the group had visited the killing fields outside Phnom Pen, where thousands of people were brutally killed during the rule of the Khmer Rouge, firmly set on “ethnic cleansing.” As a result of these killings, Conn said half of the population of Cambodia is 19 years of age or younger.

“We saw the level of poverty, but we saw at least there was a spark of hope that these kids could learn new skills and new knowledge that could provide a better life for themselves and their families,” Conn said. “What a lesson for our kids.”

“My hope is, after seeing the school and seeing the need in that part of Cambodia, we can even do more,” Conn said. “I would love for us to take a group back there in the next year or two and stay more at the school, spend more time at the school, do some activities with them.”